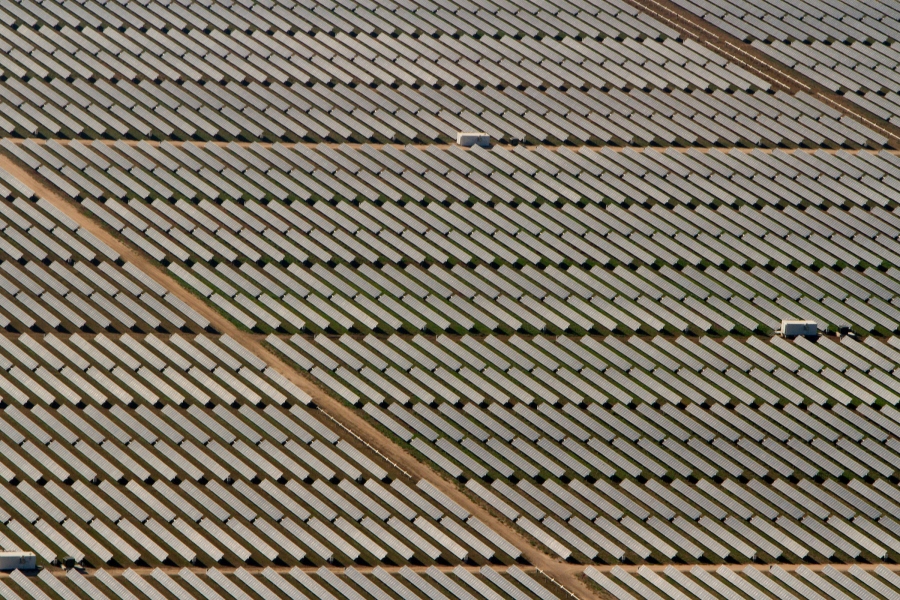 I know we need some good news.

As we begin to work on an updated Generation Plan for Austin’s energy, we are in the middle of a solar land rush!

Texas, as you likely know, has its own electric grid – managed by the Electric Reliability Council of Texas – aka ERCOT. Since 2014, utility scale solar projects have taken off, with over 60,000 MW currently in various stages of design, financing and interconnect approval.  Here’s how solar compares in ERCOT’s design queue with the other significant energy sources. More wind is coming on strong. Coal and nuclear are not even represented in the new project queue. Batteries are starting to gain traction and they’ll take out gas peakers as they grow.

For perspective, ERCOT’s current high summer demand is around 75,000 MW. You always hear that the wind doesn’t always blow, etc., – but the sun does shine over wide areas of Texas during critical those afternoon peak hours. An added bonus occurs when West Texas solar electricity is sent 600 miles east to the major population centers of Texas – thereby moving its most productive output later into the early evening dinnertime rush. The big challenge today is for Texas to once again add more transmission capacity to meet this new renewable energy opportunity.

More and more renewable energy added to the system pushes natural gas from being the lead generator into a role of following load and filling gaps. Coal can’t readily ramp up and down fast enough to be responsive and nuclear doesn’t ramp up and down at all. As batteries become economic at scale and are widely distributed on the grid, the role for gas diminishes. Batteries can charge with cheap wind power at night and be ready to go the next day – just like my car – or they can moderate power swings from renewables by charging and discharging during the day to smooth things out. Either way is a win.

Wind and solar make a complimentary combination in Texas as Mike Sloan charted so well in the 2014 Generation Plan Task Force. Shifting the solar peak an hour later in the day by utilizing a high percentage of West Texas solar helps even more. Balancing renewable resources all across Texas – especially the diversity of wind regions in Texas can help smooth out the curve further. 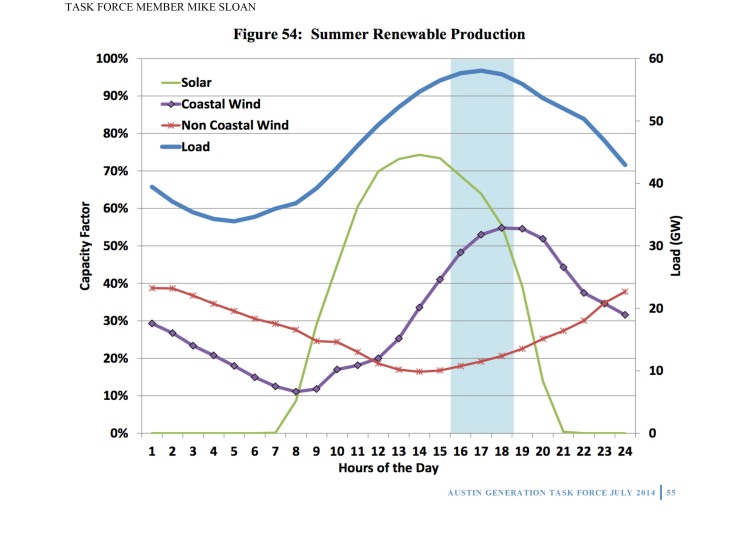 One of the terrors of the ERCOT market is that statewide hot summer afternoon where prices can spike for short periods at Russian Roulette levels. As solar increases from its present 1-2% to 30% or more, the afternoon peak becomes progressively satisfied by solar and the average cost goes down. Austin Energy’s Erika Bierschbach illustrated that in a presentation given of the Electric Utility Commission on May 13th showing ERCOT’s summer peak trend. The reduction is directly attributable to large scale solar coming online year by year – pushing out coal and older inefficient gas units and peakers.

Austin is big in renewable energy contracts, with resources spread strategically across the state. The more varied our locations, the more we are able to withstand a drop of wind in one region or cloud cover in one area.

Here is the current Austin Energy generation map –including newly committed projects in italics which are in the building phase. Large solar projects near Pflugerville (East Blackland Solar 144 MW) and San Antonio (Pandora Solar 250 MW) will help balance the weather and congestion risk of our West Texas solar while reducing transmission losses. When they come online, we’ll have a projected 1,324 MW solar and over 1,773 MW wind. Still more will be added each year to meet Austin’s power needs.

Austin Energy will be 85% carbon free by 2023 after closing the old Decker steam plants and our portion of the Fayette coal plant. Adding more renewables while closing the combined cycle gas plant at Sand Hill and the gas peakers at Sand Hill and Decker will get us to Austin’s goal of Zero Carbon.

Important Austin Energy studies are due to City Council in September on reaching these renewable and energy efficiency goals as well as a host of specific projects. These will guide our new 2019-2020 Generation Plan Working Group in reaching our energy goals and updating the Generation Plan. Working Group Meetings are scheduled twice a month, beginning September 12th, to be held 4:00 to 6:00 PM at Austin Energy, Town Lake Center, 721 Barton Springs Road. Parking is available behind Austin Energy or across the road at the Palmer Event Center parking garage. Tell them you are attending a meeting at Austin Energy and you shouldn’t be charged.

Citizen Communication is encouraged at the start of each meeting. Make your voices heard.

Zero Carbon electricity in Austin is within reach! We need everyone’s work to make it happen.

You’ll most likely find me doing outdoor and environmental photography with a passion - somewhere in Texas or beyond. Since moving to Austin, my work has been published in many national and regional publications, including - in Texas - Texas Highways and Texas Parks and Wildlife Magazine. I published a photo book on the Connecticut River with Wesleyan University Press and have continued to support conservation efforts with the Connecticut River. My work takes many forms now including writing, photography, video and editing as I work on energy and environmental issues of consequence in Texas. View all posts by Al Braden Photo